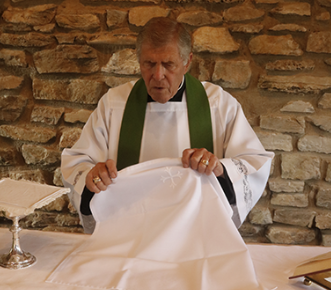 Fr. Bye is a native Texan but left at the early age of fifteen to attend the Sewanee Military Academy at the University Of The South, Sewanee, Tennessee. Following undergraduate school He attended United States Army Officers Candidate School and was commissioned a second lieutenant, serving as an infantry platoon leader and battalion staff officer in Vietnam during 1967 and 1968. He then had a commercial real estate business for fifteen years in Dallas. While attending Church Of The Incarnation he spent three years in the discernment process to the priesthood. After another three years at Nashotah House Episcopal Seminary in Wisconsin he was ordained Deacon and after another year ordained Priest in the Diocese of Ft. Worth where he served as a Cannon of the Cathedral for the next three years. He then accepted a call as Rector of St. Luke’s In The Meadow, Ft. Worth for Eleven Years before becoming Vicar and then Rector of St. Luke’s, Cypress Mill where he has served for the last ten years.